What is a tempered water loop?

A tempered water loop is a closed circuit conduit contaning fresh water at a warm, varying temperature (around 12º to 25º) that runs through the city desserving sub-stations in order to:

The water loop is not a large scale equivalent of a domestic central heating: that network type exists for a long time all around the world and is named heating network. The water temperature of these networks can be greater than 80º.

A pair of pipes

On the contrary to a central heating network that has only one pipe entering the heater and ony one pipe exiting it with a fixed water direction defined when that network is built, the water loop is a pair of tubes where the water flows in opposite directions. That’s what is illustrated in the schematic below, with a green pair of pipes for the existing network and an orange one for a planned extension. 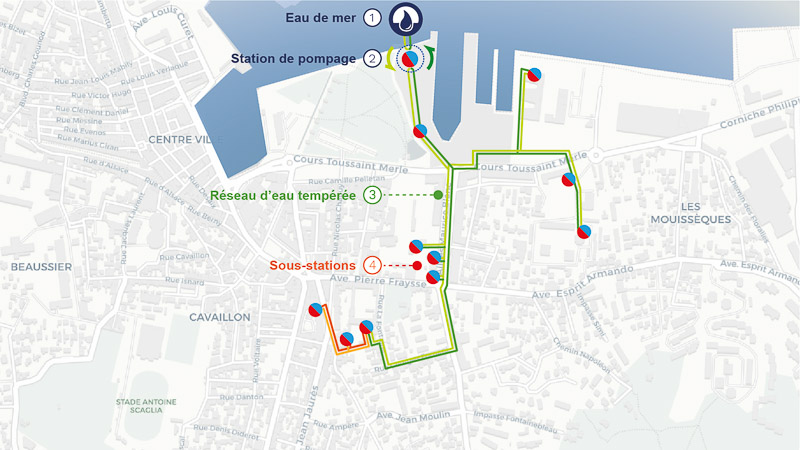 We can then choose, at the substation level, the water that will be used to heat or cool the building. As a matter of fact the water of each tube is at a different temperature depending on the substations that were previously desserved. If we want to heat the building, we will chose to use the tube containing the hotter water, and the contrary if the building has to be cooled.

The way substations are connected is chosen after carefully studying the way the water loop works, the behavior of surrounding buildings and the substations that serve them. We don’t change that on an hourly basis to preserve network stability, but possibly, when network extensions are built or new building are connected to the loop, if there is an interest to do so. We can then manage to reuse enegey that otherwise would have been wasted.

Although it may sound unintuitive, the sea has exactly same behavior as a substation for the loop water: it cools down or heat up that fresh water, according it’s own temperature instead of a heat pump operation. Sea gigantic size regarding buildings makes possible to take or give calories to it in order to maintain the water of the loop at a suitable temperature with a totally negligible influence on the environment.

The sea is then used as a cost-free energy source that equilibrates the water loop:

A final explanation to better understand…

While that ideal situation is impossible to obtain, if the heating needs of some buildings where exactly equal to the cooling needs of the others, 24 hours a day and seven days a week, that fresh water would be sufficient to transfer the required thermic energy from one building to the other, and we would not use the see to equilibrate the water loop.